The Airport Operations Centre focuses on performance-based operations. It steers, monitors and manages airport performances and proactively identifies and mitigates possible capacity constraints or disruptions. This includes disruptions affecting airport operators, airlines, ground handlers and Air Navigation Service Providers (ANSP). The APOC provides all relevant stakeholders with insights in the operational overview (situational awareness) of the airport and allows them to communicate, coordinate and collaborate their activities. The main deliverable in the APOC is the Airport Operations Plan (AOP). This is a, within the APOC commonly agreed, rolling (operations) plan and is – following the APOC concept – available for all airport stakeholders.

In 2019 Schiphol initiated the Airport Operations Centre programme. In the first year of the APOC programme the main attention went to development of APOC procedures, its physical location at Schiphol and organisational model. Nowadays, the APOC publishes an AOP on a daily basis. The overall purpose of the AOP is twofold: (A) increase situational awareness from seven days before operation (D-7) towards the day of operation (D-0) and (B) enable data-analytics on operational information stored in the AOP, so-called actuals. to improve decision-making. It should be noted that the Schiphol APOC is not yet active at D-0.

KDC initiated a research assignment to support Amsterdam Airport Schiphol (AAS) in creating a methodology for decision-making in the APOC from three days before operation (D-3) to the day of operations (D-0). The result is an initial decision model for Schiphol’s APOC (at D-1), which is developed in close cooperation with relevant stakeholders, such as KLM (hub control), LVNL and Schiphol during interviews and use-case workshops.

During workshops, multiple decision-making models were considered, resulting in a preferred model: the rational decision model. In this model it is assumed that decision-making has an orderly flow. The main steps are information gathering, data sharing, solution analysis and choosing the right decision, also known as “alternative”. 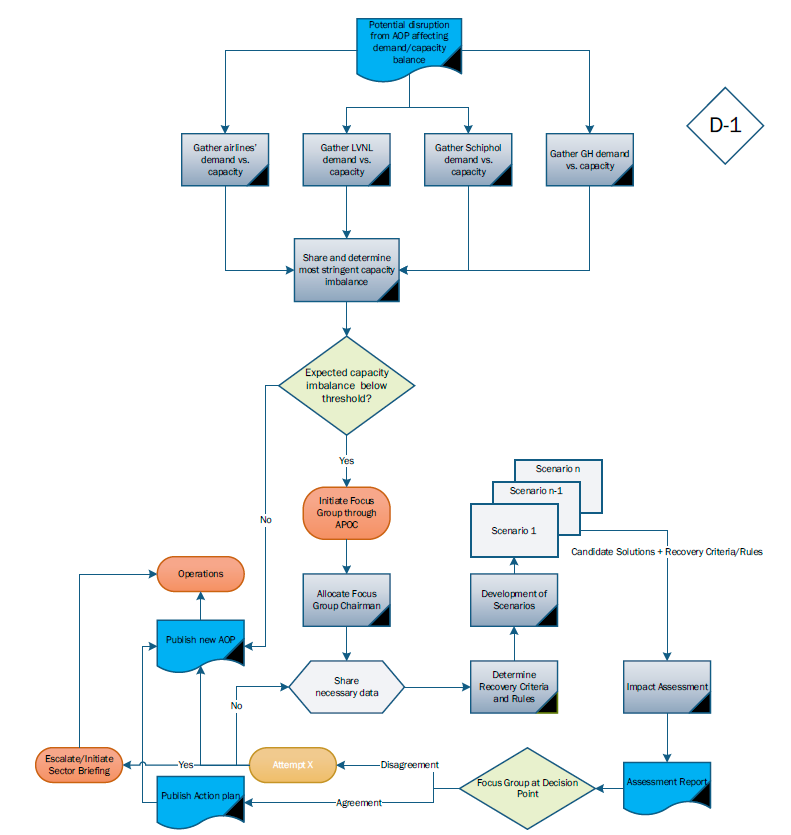 The results of this study show that one of the logical next development steps is to continue the alignment between airport stakeholders when it comes to their role/participation in the APOC (process). In order to further improve the initial decision-making model, multiple workshops with a broad sector participation could be set up. During those workshops different use-cases/scenarios could be discussed, to find the common decision steps which suit the needs for all stakeholders. It is expected that this will further enhance collaboration between stakeholders and will result in a widely accepted decision model and decision-making process for the future APOC.