By concentrating air traffic in between areas of high population density, annoyance of air traffic can be limited. The Spijkerboor departure for runway 24 at Schiphol passes between the communities of Hoofddorp and Nieuw-Vennep, but conventionally shows a significant dispersion. The implementation of a new route design with an improved method of encoding in the navigation database of the KLM Boeing 737 aircraft, showed the possibilities to guide traffic over the original route with less dispersion.

The aim of the project

The CROS Pilot 3b analysis project focuses on analysing the dispersion of the KLM B737 aircraft around the experimental departure route.

The Spijkerboor departure route is characterised by a considerable turn, almost directly after take-off. In the conventional method of navigating, the route up till and directly after the turn is described. The aircraft will then, based on its current turn performance, the weight of the aircraft and the meteorological conditions e.g. wind, decide how to execute the turn. Because of the differences in flight performance and meteorological conditions each aircraft will perform a slightly different turn. This results in a large dispersion of the flight tracks in the turn. 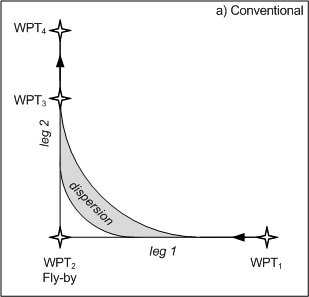 Figure: Conventional method for which the turn is only defined by WPT2

A route with turn, which is described using a radius-to-fix coding in the navigation database of an aircraft, describes the path in the turn unambiguously as an arc on the map. Aircraft which are equipped with the necessary navigation systems using the coding will try to navigate the same path, resulting in smaller dispersion of the flight tracks in the turn compared to conventional navigation. 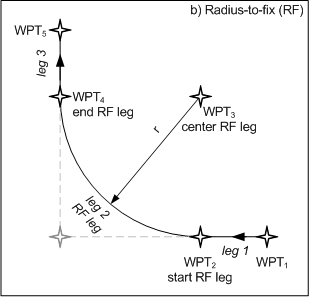 Figure for which the turn is described unambiguously with the aid of WPT2, WPT3 and WPT4 and the radius r

The radius-to-fix technique is currently primarily used for arrival routes, especially in mountainous terrain. The principle however, can also be used for departure routes. KLM has made a route design for the Spijkerboor departure which incorporates the radius-to-fix coding in the turn in between the communities of Hoofddorp and Nieuw-Vennep. Requirements for the route design:

The new Spijkerboor departure route (SID) was temporarily taken into operation as an experiment to reduce annoyance in the surroundings of Schiphol. During the first year of the trial, all Boeing 737 aircraft of KLM made use of the new route. Because the position of the SID did not significantly change compared to the conventional SID, the experiment could be operated in conjunction with the use of the conventional SID by other traffic, while maintaining flight safety and without increasing ATC workload. 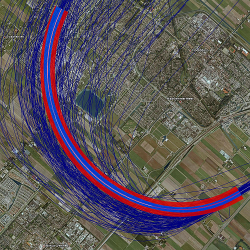 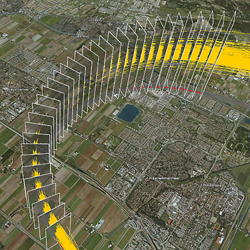 The navigation performance of the KLM Boeing 737 flight was analysed in the experiment and was compared to the other traffic on the conventional route that was not taking part in the experiment. The results showed that the flights in the experiment flew the route with a high accuracy, mostly with dispersions smaller than 80 meters even during adverse wind conditions. Because of the success of the experiment the use of the SID has been extended. Besides ongoing research to optimise the route of the CROS Pilot 3b with the radius-to-fix coding, research is also undertaken to extend the use to different aircraft types and aircraft operators and to the possibilities of the technique on other routes at Schiphol.