The European Commission has started the ‘Single European Sky’ Research Programme (SESAR) to innovate the European Air Traffic Management (ATM) system towards the year 2020. This requires innovations on many aspects of the ATM system. An important challenge lies in developing an effective arrival management system. The SARA project is aimed at developing a function for the air traffic control system that gives advice on speed and routing for inbound aircraft to Schiphol airport, thereby increasing stability and predictability of inbound traffic streams.

The European Commission has started the ‘Single European Sky’ Research Programme (SESAR) to innovate the European Air Traffic Management (ATM) system towards the year 2020. This requires innovations on many aspects of the ATM system. An important challenge lies in developing an effective arrival management system. An effective arrival management system will plan and control arriving traffic in such a way that the flights will form a smooth and reliable stream of traffic. The result is improved flight efficiency due to improved flight profiles, which is a prerequisite for flying low noise approaches that reduces the environmental impact on the communities around Schiphol.

The objective of the SARA function is to give advise on speed and/or routing to (Upper) Area Controllers in order to achieve the planned arrival time(s) of the aircraft over fixes (and implicitly via the Inbound Planning (IBP) function over the runway threshold). The Speed And Route Advisory (SARA) function is part of the (future) ATM System that assists controllers in achieving the Inbond Planning and deliver Schiphol traffic at a predetermined time at the Initial Approach Fix (IAF).

In line with the ATM System Strategy of the European Commission the SARA function will contribute to a more accurate delivery of traffic at the metering fixes (IAFs) and cause less workload for the controllers involved. It is expected that the SARA function will overall reduce the number of tactical clearances (and thus the R/T load), because of its ability to generate a single, comprehensive, conflict-free solution to meet the time at the IAF. This expectation is supported by the findings on similar functionalities like the En-route Descent Advisor (EDA) developed by NASA. From a systems perspective these benefits are needed to support an operational concept that is more stable and predictable. 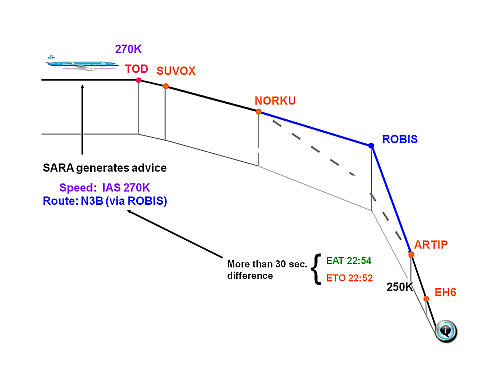 The goal of the SARA project is to deliver a high-level validated CONOPS that can be used as the basis for an implementation decision by LVNL and as the basis for further SARA functionality developments by all project partners. The maingoal will be reached with the following subgoals :

Concepts 1 and 2 were evaluated using Real Time Simulation (RTS) in NARSIM (NLR) and concept 1 was evaluated in an Operational Trial at Schiphol (LVNL).
Preceding the simulations and trials, research was done into the following aspects of the concept: