In sustainable airport development an optimal balance between customer demands and environmental constraints is key. Continuous Descent Approach (CDA) operations play a vital role in improving environmental performance in the TMA. Fixed lateral routes with a continuous descent segment have been in place since a number of years at Schiphol in single runway operations during night time. Extending the use of CDA procedures to independent and simultaneous arrivals on closely spaced parallel runways is currently not possible. The biggest challenge is to guarantee sufficient separation between the aircraft in the procedure. The IPC project focuses on designing innovative solutions for IPC at Schiphol using experts from a wide and international network.

Airports provide in a need for fast and efficient transportation. Air transport, however, has an environmental impact, both global and local. Specifically on a local scale, the surroundings of the airport are confronted with noise from aircraft. This environmental impact can affect living standards in the communities surrounding airports.

In recent years there has been an increased focus on sustainable development of airports. In this development the balance between customer demands and environmental impact needs to be balanced. Continuous Descent Approach (CDA) operations play a vital role in improving environmental performance in the TMA, as it reduces noise around airports.

Currently the use of CDAs at Schiphol is restricted to night-time operations on a single runway. Schiphol, KLM and LVNL have the ambition to extend the use of CDAs at Schiphol to day-time operations and on more runways simultaneously. Because of the runway layout of Schiphol, this leads to CDAs being flown simultaneously and independently on parallel runways.

To ensure a safe separation between aircraft in the TMA, aircraft must be separated either laterally by at least 3NM, or vertically by at least 1000ft. Current procedures for independent parallel (non-CDA) approaches can not be used for independent parallel CDA, as they can not guarantee sufficient separation between aircraft on both runways during the continuous descent.

The challenge at hand is to design an operational procedure which will allow independent parallel CDAs. As the runways at Schipol are separated by a mere 1.1NM, it is impossible to sufficiently separate aircraft laterally, as a minimum of 3NM is required. The project will therefore to focus on finding a solution to maintain a guaranteed vertical separation at all times.

The IPC project facilitates a number of workshops where experts from a wide and international network will cooperate in finding the solutions through brainstorms. Attendees include air traffic controllers, pilots and R&D experts from ANSP’s, airlines, airports and research institutes. 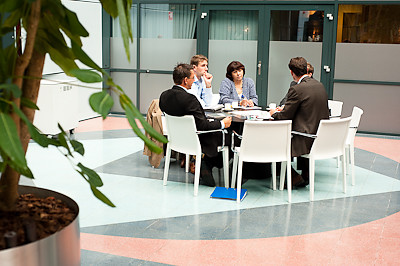 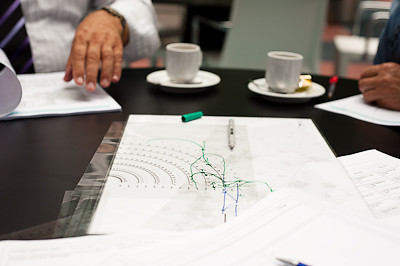 During the first IPC workshop in September 2009 solutions were identified and were combined to form several concepts. Two of these concepts were selected and worked out in more detail in terms of controller and pilot procedures and procedure design considerations.

The two concepts and alternatives have been evaluated during a 2nd IPC Workshop (December 2009) and subjected to an initial safety assessment. Evaluation of the concepts has learned that the preliminary concepts can be a starting point for further development. However, it should be noted that the preliminary concepts are dependent on progress in the fields of navigational performance and developments with regards to regulatory aspects.

To develop a more mature concept, the following actions have been recommended:

Once the concept has reached sufficient maturity, a stepwise introduction, e.g. on a single runway or non-parallel runways (06 + 36R) is recommended to gain experience and monitor aircraft behaviour in practice. 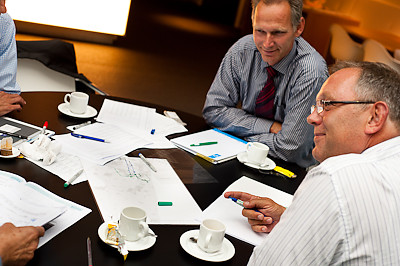