Concentrating air traffic in between communities can decrease annoyance. With this in mind, a trial started on November 22nd 2007 to concentrate traffic in between the communities of Hoofddorp and Nieuw-Vennep: the CROS Pilot 3b. The route makes use of the radius-to-fix navigation technique (also known as a RF-leg). In the CROS Pilot 3b’+ project the position of the turn is optimised to improve the noise annoyance reduction.

Three proposals to improve the route have been made in the form of alternate route designs. The most promising two designs were evaluated on the effects on environmental impact (including noise) through noise studies. Additionally the variants were visualised. 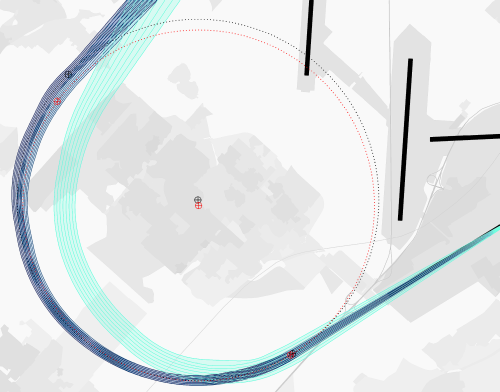 The results of the project have been presented at the residents meeting of the municipality of Haarlemmermeer in November 3rd 2009. The results of the noise calculations and calculated environmental impact of the alternative routes were explained and discussed. Furthermore computer animations of the route alternatives were presented.

After research, the municipality of Haarlemmermeer has announced during the plenary meeting of CROS in november 2009 to refrain from the wish for a wider radius-to-fix turn because of the associated shift of noise annoyance.