Low visibility has major effects on air traffic. A reliable and accurate forecast enables Air Traffic Control to anticipate these effects. The KDC and KNMI have improved and optimized the visibility forecast in the KDC-LVP project, part of the Dangerous Weather Programme. The acronym LVP stands for Low Visibility Procedure and is the name that airports use for the procedures used when low visibility is occurring or forecasted.

Low visibility, both horizontally (fog) and vertically (clouds), leads to a significant reduction of the take-off and landing capacity on Schiphol. This is caused by the fact that during low visibility separation has to be increased and parallel use of runways is not permitted.
The KDC-LVP project has two objectives: in the short term KDC wants to develop a methodology, which makes the visibility forecasts more reliable and accurate. In the long term KDC wants to gain insight in the micro climate on Schiphol regarding the low visibility conditions. Furthermore the project is concentrating on the cause and prevention of these visibility conditions.

The project has been divided into two phases, consistent with the two objectives. In phase 1 the statistical model has been improved and extended with, amongst others, a Runway Visual Range (RVR) instead of only the usual meteorological visibility. RVR is a measure for visibility that is used in aviation and better matches the pilots’ visibility experience.

Phase 2 of the project has a more long term and innovative character. In this phase the KDC researches the causes of low visibility conditions and possible ways to prevent these conditions. High resolution models and new measurement techniques will be used. Figure: The new system decreases the occurance of false alarms significantly and increses the number of hits

Phase 1 of the project has been completed in June 2007. In the figure above the difference between the old and new statistical model is shown. Especially at the hits and false alarms a clear improvement is visible. On Monday June 2nd 2008, a year after the start of the project, the executive vice president operations at KLM, Ype de Haan, and manager of the KDC, Evert Westerveld, officially sent the first new forecast from De Bilt to Schiphol. 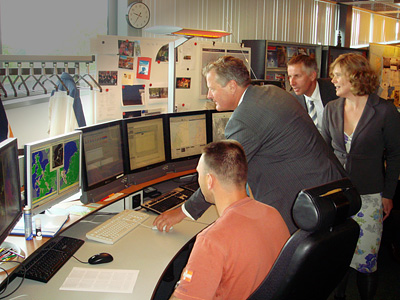 Figure: On Monday June 2nd 2008, a year after the start of the project, the executive vice president operations at KLM, Ype de Haan, and manager of the KDC, Evert Westerveld, officially sent the first new forecast from De Bilt to Schiphol.