The Dutch aviation sector (KLM, Amsterdam Airport Schiphol, LVNL), together with the Department of Infrastructure and Environment have jointly committed to develop a new concept for the Schiphol terminal airspace operations. This concept consists of fixed arrival routes and continuous descent operations. Fixed arrival routes, like standard instrument departures have the tendency to negatively affect capacity.

One of the pillars under the SESAR concept is Flight Deck Interval Management (IM). With IM, aircraft exchange flight information via ADS-B and use this information to control an ATC assigned time interval with a lead aircraft. It is assumed that this close loop control provides the accuracy and predictability that is required to maintain peak hour capacity. For the Schiphol terminal airspace IM may be an enabler to expand fixed arrival route operations and CDOs into peak hour operations.

The IM Concept of Operations

Within the KDC framework the application of IM at Schiphol has been studied since 2008. The initial study investigated the IM concept and compared it with the requirements of the Schiphol operation. This study led to the conclusion that application of IM in the TMA potentially yields most benefits, especially as an enabler to increase capacity on fixed arrival routes.

For Schiphol, IM operations start with Amsterdam Area Control (ACC) using an Arrival Manager (AMAN) and other tools, such as the Speed and Route Advisor (SARA), to build up a properly spaced sequence of aircraft to the designated runway. From this planned sequence, aircraft pairs can be determined. Each pair consists of an IM aircraft and a lead or target aircraft. The target aircraft may initially be on a different route.

Prior to entering the TMA at the IAF, the IM aircraft will receive an IM Clearance. The IM Clearance, communicated over radio, includes the target aircraft identification and route, ATC assigned spacing interval and the point where to achieve this interval (i.e., the beginning of the final approach segment). The flight crew acknowledges reception and enters the data into the on-board equipment. The flight crew assesses feasibility of the IM Clearance and initiates the IM operation.

Upon reaching the final approach segment, the spacing interval is achieved with an accuracy of approx. 10 seconds and the IM operation is terminated. The flight crew will from thereon fly speeds either in accordance with the final approach procedure or as instructed by the Schiphol Approach controller.

In the second stage of the development of the IM concept for Schiphol, IM fast-time simulations were performed in order to evaluate the performance of the IM concept and investigate the robustness of the concept against operational uncertainties. The outcome of the study is that IM-spacing can generate the required performance in the Schiphol TMA environment. 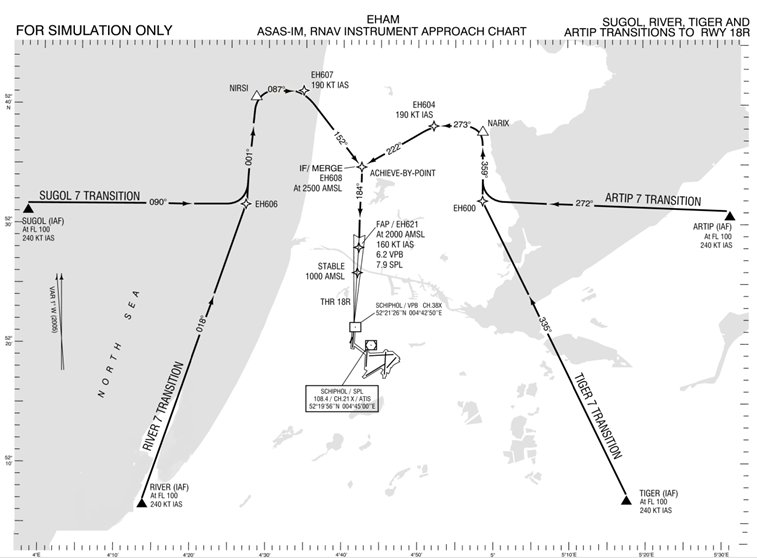 The main conclusions of the FTS study are summarized as follows:

Development of the IM concept for Schiphol now progresses with IM real-time simulations to assess controller acceptance and workload and to evaluate the IM procedures and IM support tools. The RTS study will be performed at NLR’s ATC Research Simulator (NARSIM) and is supported by an international team of experts from LVNL, KLM, NLR, TU Delft, Boeing, Rockwell Collins and NASA. If the outcome of these studies is positive, an IM operational trial is anticipated.