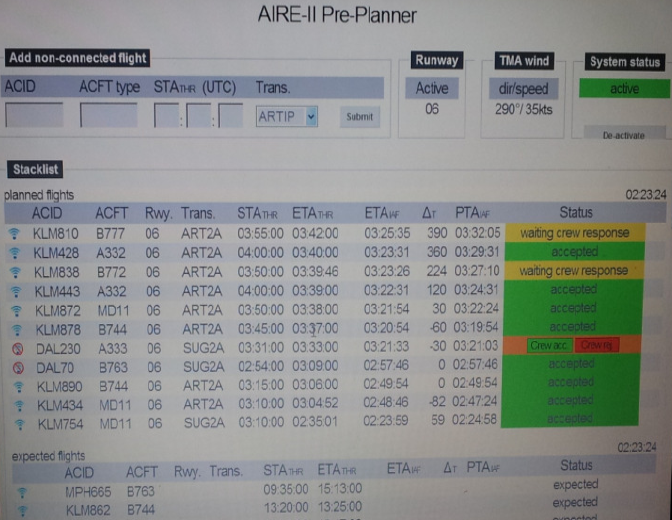 The KDC has made a major contribution to the successful completion of the AIRE project, commissioned by SESAR Joint Undertaking (SJU). The KDC role was to provide NLR expertise to the AIRE projectteam. In the project the KDC partners KLM and LVNL worked together with Delta Airlines, NATS and Eurocontrol Maastricht.

The AIRE trial at Schiphol focused on the early planning of inbound traffic so that planning conflicts were avoided in Netherlands airspace. The planning of traffic took place one hour before landing, when aircraft are still far away from Netherlands airspace. The purpose of the trial was to increase the number of undisturbed continuous descent approaches in the night, also during busier periods.

During the test period in November 2011, a lot of experience with the pre-planning system was gained, and aircraft were successfully influenced. A promotional video from the live trials has been made available and can be viewed here. In the video an LVNL controller and a KLM pilot explain how the tests were conducted. The report with the results was published on the website of the SESAR JU. It can be accessed here.

The SJU has expressed that they are very positive about the AIRE project results and has invited the consortium to continue the development. The participants of the consortium intend to proceed with this project. Possible next steps include improving the Estimated Time of Arrival (ETA) calculation by the aircraft, by means of using improved weather information. Furthermore there is still much room for improving the ATC procedures and the coordination process with adjacent centers like MUAC en NATS, especially when it comes to dealing with non-connected aircraft.